END_OF_DOCUMENT_TOKEN_TO_BE_REPLACED

The Rijksmuseum aims to connect people, art and history. Hence the surprising collection of useful utensils and accessories with prints or excerpts from old Dutch masterpieces. Making art a little more accessible!

END_OF_DOCUMENT_TOKEN_TO_BE_REPLACED 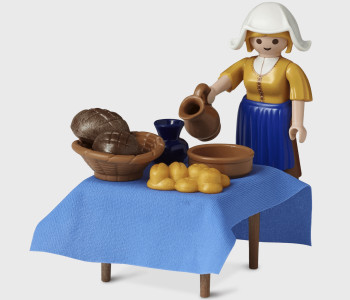 Discover the finest masterpieces in the Rijksmuseum in the most playful way. This Playmobil version of Johannes Vermeer’s Milkmaid is a must-have for Playmobil enthusiasts and admirers of Vermeer’s work, or simply anyone looking for a souvenir of a visit to the Rijksmuseum.

The Milkmaid as Playmobil 5067 figure

If you can’t get enough of The Milkmaid by Johannes Vermeer (1632-1675) and you’d like to pass on your enthusiasm to the next generation, this Playmobil set is the ideal purchase. The set perfectly captures the irresistible appeal of Vermeer’s masterpiece, so even the very youngest among us can be enchanted by the magic of Vermeer’s brushstrokes.

Vermeer: one of the Big Three

The Milkmaid is one of the best-known works by the painter Vermeer, who is considered to be one of the Big Three of the Golden Age, alongside Frans Hals and Rembrandt van Rijn. His work is less exuberant than that of his contemporaries and more often shows the simplicity of life. This also goes for The Milkmaid, although the name isn’t actually accurate – the woman in the picture is really a kitchen maid. A milkmaid would have been the person bringing milk to the house and would traditionally have been dressed differently.

Frederik Roijé, the designer of this Playmobil version has devoted a lot of time to recreate the painting. Look at the details in the girl’s clothing in particular, and also the accessories on the table, which are copied to perfection without losing any of the playfulness of Playmobil. It’s a masterpiece in itself!

To make art accessible to the widest possible audience, the Rijksmuseum in Amsterdam has joined forces with the German toy company Playmobil. Together they have created three Playmobil sets based on the paintings The Night Watch, ‘Marten and Oopjen’ and The Milkmaid as an introduction to art for a young audience.