END_OF_DOCUMENT_TOKEN_TO_BE_REPLACED

Hollandsche Waaren plays with traditional Dutch characteristics and symbols. All products in the series by designer Anne-Marie Jetten include a recognizable element with a contemporary twist.

END_OF_DOCUMENT_TOKEN_TO_BE_REPLACED 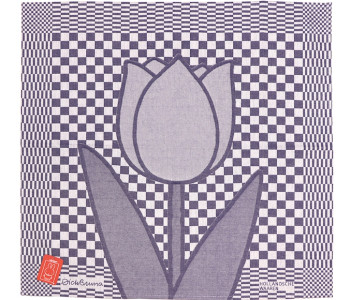 A Tulip on your tea towel. This Dutch icon of Oriental origin is drawn simply but with character by Miffy creator Dick Bruna and transformed into a tea towel decoration by designer Anne-Marie Jetten of Hollandsche Waaren. A fresh and nice detail in the kitchen. Drying is more fun with a tulip tea towel.

This typical Dutch Tea towel is designed by Anne-Marie Jetten of Hollandsche Waaren and based on the Tulip drawn by Dick Bruna in the Miffy series. The tea towels are made of 100% cotton and woven on a jacquard loom. The Tea towel Tulip has a size of 65x65 centimeters. A fresh and nice detail in the kitchen.

Tulip (Tulipa) is a genus of flowering plants in the lily family, which in the wild occurrence from north Africa and southern Europe up to the northwest of China. Ottoman sultans wore a Tulip on their turban as a symbol. The name tulip is so submitted by the Persian word "target band" (دولبند) that means turban. The first tulip bulbs in Western Europe arrived in 1562 in Antwerp. The story is that a merchant found the bulbs between a load Turkish fabrics. Thinking that they were onions, he tasted one. Because the taste was disappointing the remaining bulbs ended up on the compost heap, where there a year later tulips were blooming. Netherlands is famous for its cultivated tulips and is one of the main export countries of tulips and tulip bulbs. Traditionally, the 'Keukenhof' Spring Garden in Lisse is a crowded exhibition made of millions of tulips.

Dick Bruna (23 August 1927 – 16 February 2017) was a Dutch author, artist, illustrator and graphic designer. He is the mastermind behind the world famous rabbit Miffy, nijntje as it is called in Netherlands. Miffy is characterized by simple shapes and primary colours, still able to communicate emotion and the sweetness and softness of this lovely rabbit and popular to this day

products are designed with a nod to Hollandsche symbols and characteristics. Anne-Marie Jetten is the designer behind the Hollandsche Waaren brand. The label that stands for self designed products of ceramics and textiles that in a very own way show where Netherlands is famous for. By focusing attention on details, the characteristic Dutch elements come forward and an innovative product arises.