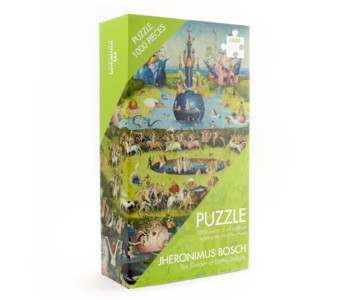 Jheronimus Bosch's most famous work as a puzzle. Under your hands you can see this phenomenal painting emerging. The puzzle has a medium difficulty. The Garden of Earthly Delights is good for hours of puzzle fun.

The Garden of Earthly Delights

The Garden of Earthly Delights is the title given to a triptych by the Southern Dutch painter Jheronimus Bosch that you can admire in the Prado in Madrid. The painting has a unique colorful late medieval visual language. Opinions are divided on its meaning, although most authors agree that the painter here denounces the sinfulness of humanity. Although it is in the form of a triptych, it was never intended as an altarpiece. The painting is first mentioned in 1517 in the Great Hall of the Palace of Nassau on the Hofberg (now Kunstberg) in Brussels.

Around 1450 Hieronymus van Aken was born in Hertogenbosch. After primary school, Hieronymus went to the Latin School, which distinguishes him from most of his peers. At the age of 12, Hieronymus started to practice painting on canvas. At the age of 20, he married the wealthy Aleid van Meervenne and he moved to Aleid's house on 'De Markt' in Den Bosch. His reputation as a painter grows considerably in those years, both inside and outside the city of 's Hertogenbosch and he gained respect and status and started to sign his paintings with his stage name 'Hieronymus Bosch', inspired by the city where he lived, loved, painted, died and was buried.