END_OF_DOCUMENT_TOKEN_TO_BE_REPLACED

Self-producing designer Olav Slingerland works daily on his creative, self-cast ceramic dishes, bowls and vases. Ceramics by Olav Slingerland are characterized by organic forms which he is able to combine excellently with industrial details. This allows him to create startling contrasts in his work.

END_OF_DOCUMENT_TOKEN_TO_BE_REPLACED 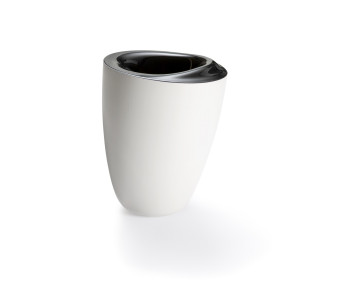 Watch out! The vase is overflowing! The Still vase by Goods creates the illusion of a liquid overflowing. This design vase is an interplay between a tilt and a blue ‘overflow.’ By combining several or different sized Still vases, you will add a playful effect to your interior! The Goods Still vase by Olav Slingerland is a special design accessory.

With or without flowers!

The Goods Still vase has a highly decorative value. Even without flowers, these vases by designer Olav Slingerland are a treat for the eye. The Still vase by Goods creates the illusion of a liquid overflowing. The interplay between the tilt of the design vase and the blue high-gloss paint overflowing creates a playful effect. Combined with the larger-sized Goods Still vase XL or several Goods Still vases - for example - you will create a vivid scene that will make your interior shine. The Still vases of white ceramics are primarily suitable for bouquets or larger flowers.

Watch out! The vase is overflowing!

During the ceramic process, designer Olav Slingerland uses molding clay. For the large Still vase by Goods, Slingerland allows the mold of the dishes overflow. The result is a capture of the moment at which the molding clay threatens to flow over the edge. The name ‘Still vase’ refers to stills (frozen or stopped images) in film materials. The Goods Still vase L is made in a small/medium series by Slingerland. Each item is therefore unique, and in each vase you can recognize the touch of the master!

Goods Still vases are stylish and playful at the same time. The outside of this ceramic vase is white; its inside has a dark-blue high-gloss paint. Because of the color contrast and the liquid shape, the Still vase by Goods looks well in every interior. With or without flowers! The Goods Still vase is a small vase with a height of 27 centimeters and a 18-centimeter diameter. The Stills are also available in an extra large version with a height of 41 centimeters and a diameter of 30 centimeters.