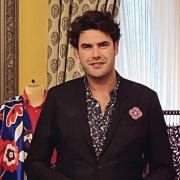 END_OF_DOCUMENT_TOKEN_TO_BE_REPLACED

Michael Barnaart's work is characterized by accessibility, clear design and unique graphic designs. A combination of authentic culture and accessible designs, both in aesthetics and price. The collections are produced in a limited edition in an artisanal way in the Netherlands.

END_OF_DOCUMENT_TOKEN_TO_BE_REPLACED 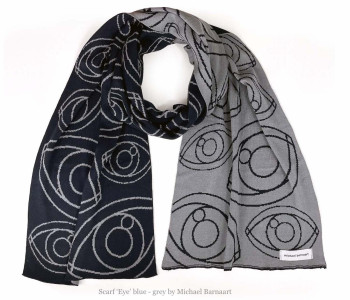 A fine wide scarf (205 x 38 cm) with a graphic design of eyes, by fashion designer Michael Barnaart. Inspired by the expressive eyes in the paintings of Cornelis Kruseman (1797-1857). The Eye scarf can be worn on both sides, the back has the opposite color scheme. Sustainable and artisanally made in the Netherlands from a 50/50 blend of cotton and acrylic according to the 'zero waste' principle: there is no residual material left!

This scarf has a pattern of stylized eyes, a design by the fashion designer Michael Barnaart based in The Hague. The Eye scarf has a generous size (205 x 38 cm), is made in the colors chestnut and black and can be worn on both sides because the back has the opposite color scheme (diapositive). The Eye scarf consists of 50% cotton and 50% acrylic and is sustainably and artisanally made in the Netherlands according to the 'zero waste' principle: no residual material remains during production.

Cornelis Kruseman (1797-1857) has been taking lessons at the Amsterdam Drawing Academy from the age of 14 and was apprenticed to Charles Howard Hodges, Petrus Antonius Ravelli and Jean Augustin Daiwaille. At an early age he gains fame and becomes the teacher of others. He works in Rome and The Hague and is therefore called the Italian Kruseman and The Hague Kruseman. During his lifetime, Kruseman was already a celebrated painter. He maintained close ties with the royal family for which he made several portraits. The work of Cornelis Kruseman falls into different categories, namely history pieces such as 'The Battle of Bautersem', portraits including W.A. Baron Schimmelpenninck van der Oye and Italian scenes such as 'One of meaning' (Rijksmuseum Amsterdam).

This Dutch fashion designer, based in The Hague, presented his first couture collection in 2008. His work is characterized by accessibility, clear design and unique graphic designs. In which authentic culture is translated into accessible designs, both in aesthetics and price. With comfortable jersey dresses, Michael Barnaart places his work at the intersection of industrial design, graphic design and art. It is not without reason that the creations made in the Netherlands are worn on the street as well as exhibited in various museums. The Michael Barnaart collections are produced in a limited edition in the Netherlands in an artisanal way.