END_OF_DOCUMENT_TOKEN_TO_BE_REPLACED

Royal Delft is the brand associated with Holland's most recognisable product: Delftware. The company has a rich history with its origins in 1653, when the pottery workshop 'De Porceleyne Fles' was founded.

END_OF_DOCUMENT_TOKEN_TO_BE_REPLACED 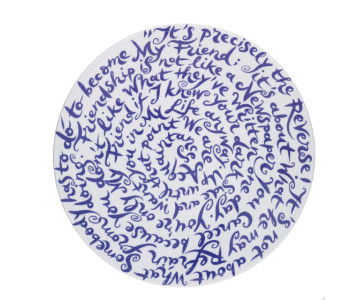 A series of porcelain plates with phrases in calligraphy. This Diskus Plate is about “friendship” – see the full text below. Obviously to eat from, but also as a source of subjects for discussion and discourse at the dinner table. Large plates with a diameter of 31 cm. The result of a collaboration between artist Nicole van Schouwenburg and Royal Delft. An inspiring gift. Order a matching giftbox here!

Diskus is a series of porcelain plates that feature phrases about various subjects in calligraphy. Your dinner conversations won’t just be about work, politics, or the children, but also about food, chance, and happiness. Available with two Dutch and two English texts. The name Diskus originates from the Greek word for plate or disc and from discussion or discourse. Diskus was born from a collaboration between calligraphic designer Nicole van Schouwenburg and Royal Delft.

"It`s precisely the Reverse! It`s not about What Somebody has to dó to become My Friend; it`s about What he may Refráin from doing. Friendship is not like a Newspaper you Cancel because you don`t like What they`ve Written one day. You`re only My Friend if I know your dark Side and want you in My Life anyway. Up until that point we are Acquaintances"

Nicole on how it all started: "I like to create calligraphy artworks. Preferably with a brush and blue ink. With panache and curls. In 2005, I stumbled on an idea: I’m going to paint a plate with a phrase that is written from the outside to the inside, making it decorative. At a certain point I thought: it’s almost similar to Delftware! With a concept plate, I visited the Porceleyne Fles in Delft. The people here were immediately impressed and thought my plate would make a good product. We started to create the first series. We performed tests in a laboratory to determine the best blue color and the ideal type of plate. A fun and interesting process”.