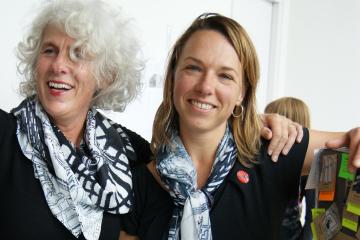 Everything about
Mirjam Hagoort

The Dutch visual artist Mirjam Hagoort (1961) and urban designer Marjolein Peters (1975) met in the Haarlemmer Houttuinen, where they both established their studios. They discovered a shared passion for the city. In the project Barentsz Urban Fabric that originated from their friendship, they combine their love for city aesthetics and graphic structures. Through scarves they allow people to express their pride for the city. The fabrics consist of simple black and white maps of districts or areas. Using the supplied set of badges you can mark your favourite places. Therefore, the City scarf Amsterdam is first of all a social project. Your city, your story, your scarf! The City scarf and Holland scarf are both excellent souvenirs for tourists. But perhaps even more of a statement for those born in Holland, Rotterdam or Amsterdam.

Mirjam Hagoort studied at the Academy for Visual Arts in Rotterdam and the Royal Academy for Visual Arts in The Hague. Her paintings and drawings all have one particular theme: the city. Her works are about volatile places, intimate interiors and the surprising charm and grandeur of anonymous landscapes. Hagoort applies painting techniques, printing techniques and her drawing skills. After she received a Royal Grant, she perfected her imagery even further.

Marjolein Peters is an official urban planner. During her studies in Delft she became intrigued by the graphic structures of maps. Scenic lines in particular, inspired her to create new urban designs. After her graduation in 1999, she worked at the Department of Urban Development of the City of Amsterdam. In 2006 she founded her Studio Scale and focused on the translation of complex urban ideas into clear visual designs.

As of today, Barentsz Urban Fabric is only involved in the creation of scarves. The map of Amsterdam inspired them to design the City scarf. A map not only consists of a network of streets to live in or travel through. The city also stands for activities, opportunities and calm moments. It is this specific place and pattern that they try to capture in their scarves. The combination of geographical contours of the city and country and the graphic lines of the canals, boat connections and routes result in an artistic ensemble. The result is a high quality scarf made of cotton voile, printed with black and white maps. Thanks to the colored pins you can capture your favorite memories, mark your travels and even express your pride for certain areas.
Mirjam Hagoort en Marjolein Peters delen een passie voor de schoonheid van de stad en grafische structuren. De sjaals met stadsplattegronden en patronen zijn hiervan het resultaat!