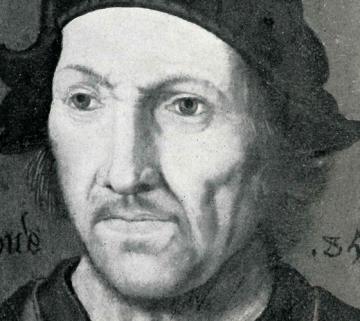 Everything about
Hieronymus Bosch

Around 1450 (the exact date is not known) Hieronymus van Aken was born in the house of his grandfather in 's Hertogenbosch. His grandfather, Jan van Aken, was also a painter and owned a painter's studio at home, where the father and uncles of Hieronymus also practiced the art on canvas. After primary school Hieronymus went to the Latin School, which distinguishes him from most of his peers.

Not so rich, but famous

In 1488 he was "sworn member" of the Brotherhood of Our Lady. Membership in this elite company grows Hieronymus' prominent status. At that time Hieronymus started to sign his paintings with his stage name "Hieronymus Bosch", inspired by the city where he lived and worked. The work of Hieronymus is loved and life is good for Hieronymus. He became quit famous and he had clients from home and abroad, but he became not particularly rich.

At about the age of 36 Hieronymus Bosch is buried on August 9th in 1516. What caused his death is unknown. What is known, is that Hieronymus' paintings have remained special and unique, even after 500 years. And that he may be called Holland's most famous painter. Born, raised and deceased in his city, 's-Hertogenbosch.