END_OF_DOCUMENT_TOKEN_TO_BE_REPLACED

The Amsterdam based design studio Admiraal was established in 2002 and is housed in the NDSM Art City. Owner Robert Admiral drew inspiration from the Amsterdam canals in creating various products.

END_OF_DOCUMENT_TOKEN_TO_BE_REPLACED 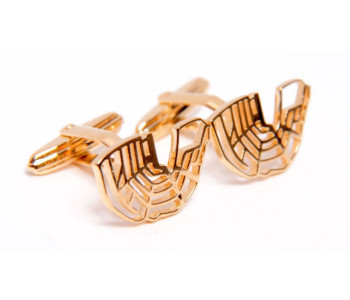 Touch of Dutch: the Amsterdam canal ring in the form of gold-plated cufflinks. Designed by Robert Admiraal, created from 18 carat gold-plated silver. These 'Canals of Amsterdam' cufflinks give a stylish Dutch touch to your business outfit. What we call ''dressed in Dutch detail'. Treat yourself … or someone else.

The 'Canals of Amsterdam' cufflinks are 100% handmade, created from 18 carat gold-plated silver. We deliver these cufflinks in gift packaging that includes a flyer describing the origins of Amsterdam's canals.

The Amsterdam canal ring is immediately recognizable from aerial photos and maps thanks to the characteristic semi-circular shape formed in the city center by Herengracht, Keizersgracht, and Prinsengracht This canal ring was constructed during the Golden Age (1600-1700) and through the centuries has developed into one of the most unique places in the world, named as a UNESCO World Heritage Site in 1999. The network comprising various waterways was originally made for drainage and land reclamation for the city's expansion. The canal ring was initially built for practical reasons, but the area later developed into an environment that characterizes the city. Wealthy merchant financiers invested their money in building houses along the canals. This is how the Singel, Herengracht, Keizersgracht, and Prinsengracht came into being.

Every year in August, the annual Canal Festival takes place. If you enjoy open-air concerts, you should not miss the unforgettable Prinsengracht concert, which brings the Canal Festival to a close.